Caro is a French artist, who has been living in Vancouver, BC, since 2003. She was born in France and grew up in a big forest where her father, François Archiguille, a successful painter, had a large studio alongside a cozy home. Surrounded by nature, Caro’s childhood world was infused with colours and an idealised vision of life where reality often met fantasy. Very early, she developed a special need to confide in elements of Nature and, in particular, a statue of a Madonna set in the hollow of a tree, that became her confidante. Later on, these symbolic presences would appear in her work as inner guides. Her paintings reflect this harmony with her surroundings. They reveal a resonance with the Spirit of Nature and a deep desire for connection. 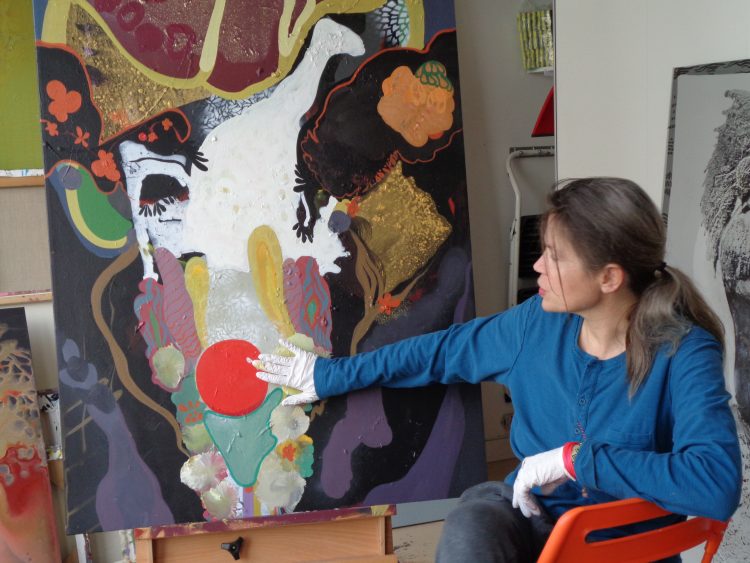 Although Caro began her studies in literature and psychology, her true calling tapped her on the shoulder while living in Scotland in 1989. She had been feeling lost as to her life’s direction when she happened upon an art store, entered, and immediately felt at ease, and excited. She started painting and never looked back. Subsequently, living in Italy for two years and travelling through Europe, North Africa, Asia and North America gave her a great sense of freedom and inspired her mission in art, namely, to convey, through colours, this feeling of freedom and passion to live fully.

Caro regards her paintings as companions with whom she can grow. They serve as mirrors as she attempts to reach her innermost nature. Her work is the embodiment of creative energy and human potential which invites the viewers to feel their own limitless potential.

Her creations are influenced by the ethereal qualities of nature, the invisible power of things, Eastern philosophy, Vedic mythology, abstract expressionist painters, the colourful world of Matisse, Gauguin and the mystical paintings of Caspar David Friedrich.